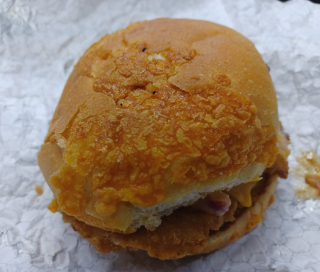 The cheddar bun is nice, but unfortunately you don't get the toasted cheddar in every bite

Wendy's kicked things up a notch in August and took a step ahead of the competition by introducing their Cheddar Bun, featured in a Bacon Cheddar Cheeseburger.  You can check out that review here.  The toasted cheese on the bun has been so popular, Wendy's now features the bun in select chicken sandwiches in addition to the burger option.

Here's the description from the Wendy's website:  A juicy, lightly breaded chicken breast covered in creamy cheddar cheese and bacon jam, topped with Applewood smoked bacon, crispy onions, and a slice of American cheese, all on a pillow-soft, toasted cheddar bun. If the world runs out of bacon and cheese, we’ll take the blame.

This my friends is a very nice chicken sandwich!  The chicken was fried perfectly, it was tender, juicy, the breading was seasoned well with a nice crunch.  There's A LOT of flavor going on with the bacon jam enhancing that Applewood smoked bacon, you get the notes of pimento in the creamy cheddar cheese. Despite the warmth of the sandwich, the sauces and melted American cheese, the crispy onions remained crispy.  Tying it all together was the toasted cheddar bun, which elevates the sandwich.

The under the lid reveal 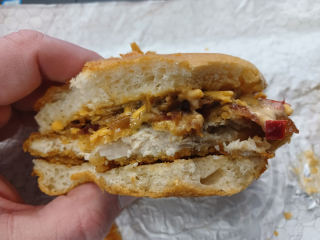 Not the thickest chicken breast in fast food

Costing me $9.99 for a combo meal that included Wendy's new fries and a drink, I'm giving the Wendy's Classic Big Bacon Cheddar Chicken 4 out of 5 Bachelor on the Cheap stars.  It's big on flavor, but the lack of a more complete cheddar coverage on the bun and a less than 'Big' sized chicken breast holds this sandwich back from being a 5 star sandwich.  Popeyes is still king.

Related:  Taco Bell vs. Wendy's in a toasted cheese war