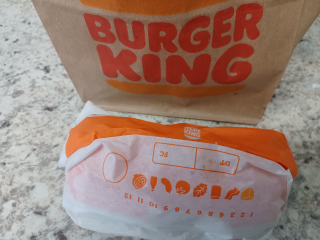 When reviewing Burger King's New Ch'King Sandwich the other day - you can read that review here - I saw that Burger King has also brought back a classic from yesteryear, The Italian Original Chicken Sandwich.  Seeing it on the drive through menu, I knew I was going to make a return trip in the name of 'food nostalgia.'

The Italian Original Chicken Sandwich first appeared on the BK menu way back in 1979.  The sandwich consists of an elongated, breaded white meat chicken patty, dressed with marinara sauce, topped with melted mozzarella cheese and served on sesame seed bun.   Burger King has rolled out this sandwich in addition to introducing their new Ch'King Sandwich in fighting the Chicken Sandwich War. 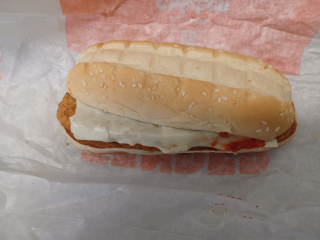 Chicken Parmesan in a sandwich

I had a few Italian Chicken Sandwiches back in the day, it was a classic favorite from the pre-chicken-sandwich-war period, but Burger King took it off the menu in 2014.

I liked the sandwich back in the day and I still like it today.  Despite being a processed chicken patty, it is white meat, it was fried to perfection and the light breading provided a nice crunch in each bite before hitting the tender, juicy, chicken.  The marinara sauce is a good one and the mozzarella was melted nicely.  Topped with that sesame seed bun, this is Chicken Parmesan in sandwich form. 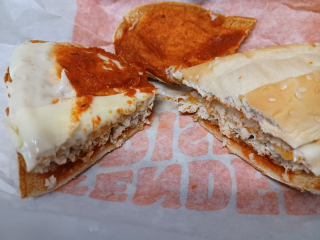 The under the lid look

Part of BK's "2 for $6" lineup, which also includes the Whopper, Chicken Fries, and the Big Fish sandwich, I'm giving Burger King's Italian Original Chicken Sandwich 4 out of 5 Bachelor on the Cheap stars.  It is a chicken sandwich original, it's got the Chicken Parmesan flavor working, it very reasonably priced in the 2 for $6 deal and it's a repeat buy.  It's available now nationwide but only for a limited time.  It was fun to take a trip down Chicken Sandwich Nostalgia Lane, this sandwich is still a good bite!