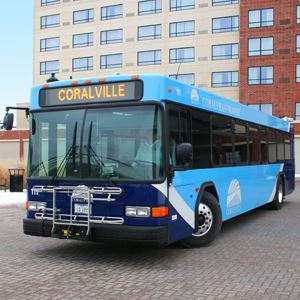 Changes go into effect on July 6, 2021, which will make bus fares and passes consistent between Coralville Transit and Iowa City Transit, and will better coordinate service between the area transit systems.

There are no rate increases to Coralville Transit, and the adult fare remains the same. The changes include a new reduced youth fare of $0.50 for riders age 5-18 years old, and three new types of passes for Coralville Transit: a 24 hour pass, a 10-ride pass, and a youth 31-day pass.

About the Changes
Following a public hearing, the Coralville City Council approved the changes to fares and passes at the City Council meeting on May 25, 2021. These changes are a result of the Iowa City Area Transit Study that began in August 2019. The transit study reviewed bus routes, stops, schedules, fares, and transfer policies, and looked at ways to better coordinate area transit systems. Based on the study, Coralville Transit also implemented new routes and schedules in October of 2020.

For more information about Coralville Transit, call 319.248.1790 or visit www.coralville.org/transit.