The City of Iowa City is considering the addition of a buffered bike lane to both Dodge Street and Governor Street as part of the Asphalt Resurfacing 2019 Project.

These bicycle lanes have been identified as a recommended improvement by the Iowa City Bicycle Master Plan. However, on-street parking will have to be removed to accommodate the new bike lanes.

A public open house will be held on Wednesday, Aug. 7, 2019 to discuss the Asphalt Resurfacing 2019 Project, and the proposed bicycle facilities. The meeting will be held from 6 to 7:30 p.m. at Emma J. Harvat Hall in City Hall, 410 East Washington St.

If you have any questions about the project, or need disability-related accommodations in order to participate in this event, please contact Jason Reichart by email at jason-reichart@iowa-city.org or by phone at 319-356-5416. Early requests are strongly encouraged to allow sufficient time to meet your access needs.

The Iowa City Parks and Recreation Department has announced the schedule for the final days of the City Park Pool season.

City Park Pool regularly opens for Memorial Day and closes after Labor Day. The pool's last day this year will be Labor Day: Sept. 2, 2019. The full schedule for the last two weekends is as follows:

IOWA CITY -- The suspect from Monday’s officer-involved shooting incident, Cierra Lewis, 25, has been released from the hospital and transported to the Johnson County jail with the charges below.  No charges regarding the original call for service have been filed and the investigation is ongoing.

The involved Iowa City Police Officer has also been released from the hospital.  Per departmental policy, he has been placed on administrative leave until the investigation regarding the shooting has concluded. 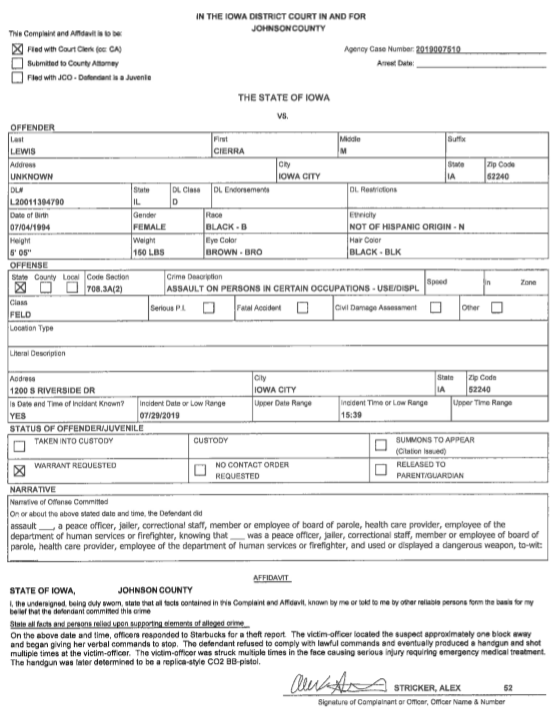 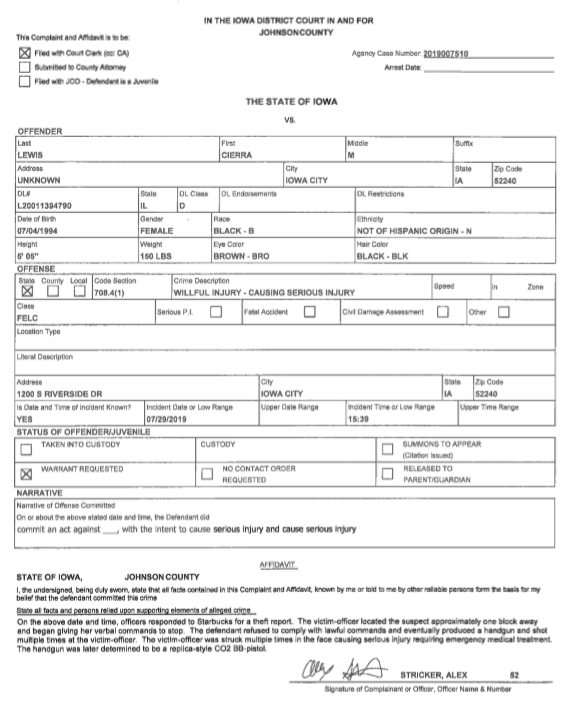 On Monday, July 29, 2019, at approximately 3:29 p.m., officers with the Iowa City Police Department responded to a shoplifting complaint at a business located at 11 Highway 1 West.

A suspect was located in a nearby area, away from the business.  As the investigation was unfolding, an Iowa City Police Officer was shot multiple times with a weapon and received injuries to his face. The weapon was later identified as a BB gun. The officer also fired his weapon, striking the suspect. The officer and suspect were each transported to a local hospital and are in stable condition.

The Iowa Division of Criminal Investigation (DCI) is investigating the incident. No further information will be released until the involved officer has been interviewed.

IOWA CITY -- The City has announced road closures for Summer of the Arts' Soul and Blues Festival, which takes place Downtown on Friday, Aug. 2 and Saturday, Aug. 3, 2019.

Iowa Avenue between Linn Street and Dubuque Street will be closed to traffic and parking beginning at 8 a.m. Friday. Linn Street from Iowa Avenue to the alley north of The Senior Center will also be closed.

Roads and parking should reopen on Sunday, Aug. 4.

The festival celebrates the culture and art of African and African-American communities and their positive influence on eastern Iowa and beyond. The celebration includes dance, music, fun, food and art for all ages.

For the lineup of events, visit summerofthearts.org.

On Tuesday, we hosted Spark North Liberty, a night of big ideas and stories about our community, as part of our ongoing community visioning work. Our thanks to 17-year resident Kelly Sittig for volunteering to emcee, to those who presented ideas and stories, and to those in attendance for the positive energy. Spark was a reminder of… 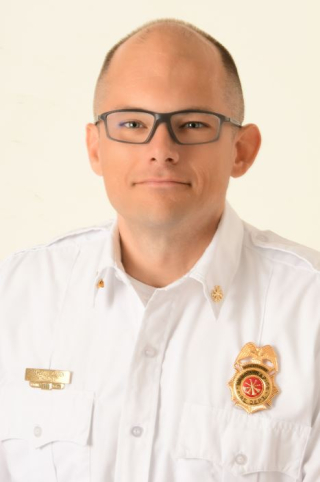 Olesen has been with the Cedar Rapids Fire Department since 1999, serving at a Firefighter, Captain, Battalion Chief and Training Chief over the last 20 years. He served as Accreditation Manager during the process towards achieving department accreditation in 2018, received the Chief Fire Officer Designation from the Center for Public Safety Excellence in 2014, and the Fire Department Award for Distinguished Service in 2010.  Olesen has served on the Hazardous Materials Response Team and Special Operations Team since 2002.  In addition, he was a member of the Iowa Task Force 1 Urban Search and Rescue Team.

“Andy’s extensive work and educational experience make him the ideal candidate to serve in this role,” said Jeff Pomeranz, Cedar Rapids City Manager.  “I am proud of the talent within our Fire Department who demonstrate leadership qualities and a dedication to service.”

Cedar Rapids Fire Chief Greg Smith assumed his role in April 2019 after serving in the Department for 24 years. “Andy approaches every challenge with intelligence, grit and determination,” said Smith.  “He has proven himself to be an integral leader of the department. I look forward to working together as we continue to build on the success of the department, and ensure the safety and wellbeing of the Cedar Rapids community.”

Olesen is looking forwarding to working with firefighters and fire officers to solve the complex problems that the department encounters on a daily basis. “I enjoy knowing the work we do across the city has a real and positive impact on the lives of our residents and visitors,” said Olesen. “Doing that work with some of the most capable people around is deeply rewarding.”

DES MOINES, Iowa – MidAmerican Energy Company today launched a first-of-its kind effort in Iowa to establish a network of electric vehicle fast-charging stations in more than a dozen cities throughout the state.

Once MidAmerican Energy selects site hosts, the company plans to begin building the charging network by the end of the year.

Charging station hosts will set their own usage fees, consistent with state laws and regulations.

“Car owners and potential buyers tell us access to charging stations within reach of the routes they drive will improve their confidence the electric vehicle will meet their needs,” Nation said. “We’ve come up with a plan to address the range anxiety issue by building an infrastructure of 15 fast-charging stations across Iowa that should be within roughly 50 miles of each other. We think our efforts will help jump-start Iowa’s electric vehicle industry.”

The company provides $500 rebates to residential customers who buy or lease a new electric vehicle.

Rebate information is available on the company’s website at MidAmericanEnergy.com.

Join spinners and weavers from the Craft Guild of Iowa City for demonstrations at the Annie Gill Craft Table.… Read on

The Friends of the Coralville Public Library quarterly used Book Sale.… Read on