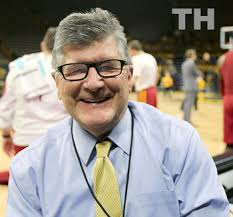 Here's the Dolphin comment in question, a five-seconds long, matter-of-fact statement about a Maryland player who was kicking some butt:

“They (the Terrapins) had some pretty good long range shooting and then (Maryland big man Bruno) Fernando was King Kong at the end of the game.”

I got what he was saying, Fernando was blocking shots, pulling down rebounds and scoring big buckets, just like King Kong swatted down planes from the top of the Empire State building.  King Kong kicked some butt, so did Fernando.

Maryland beat Iowa 66-65 in large part, because of Fernando's tenacity.

Here's the official Statement from Hawkeye Sports Properties, a division of Learfield Sports:

Feb. 22, 2019 — Hawkeye Sports Properties, the multimedia rights manager for University of Iowa Athletics, today announced it has suspended play-by-play announcer Gary Dolphin indefinitely through the remaining basketball season. The decision follows an inappropriate comment made by Dolphin during Tuesday’s broadcast of the Iowa men’s basketball game against Maryland.

Gary Dolphin issued the following statement: “During the broadcast, I used a comparison when trying to describe a talented Maryland basketball player. In no way did I intend to offend or disparage the player. I take full responsibility for my inappropriate word choice and offer a sincere apology to him and anyone else who was offended. I wish the Iowa Hawkeye players, coaches and fans all the very best as they head into the final stretch of the season. I will use this as an opportunity to grow as a person and learn more about unconscious bias.”

For the remainder of the basketball season, Jim Albracht and Bobby Hansen will serve as the radio announcers for Iowa’s men’s basketball games.

Dolphin was suspended for two games earlier this year for telling the truth.  I'm thinking somebody high up just doesn't like the guy.  What's next, suspend him for sneezing and accidentally getting some snot on the microphone?

Dolphin has twice been selected as Iowa Sportscaster of the Year by the National Sports Media Association and was recently presented with the 2018 Distinguished Service Award by the Iowa Hawkeye Football team.

Dare a play-by-play announcer comment on a player thumping their chest after a big play? Will someone get politically correct with that too?