Are you new to yoga and want to learn more before you commit to a class?… Read on

Iowa City Update is a weekly video featuring City of Iowa City projects, programs and events. Topics this week include a reminder of the City’s fireworks ordinance, details on holiday tree collection, and more. Click the image below to watch Iowa City Update. 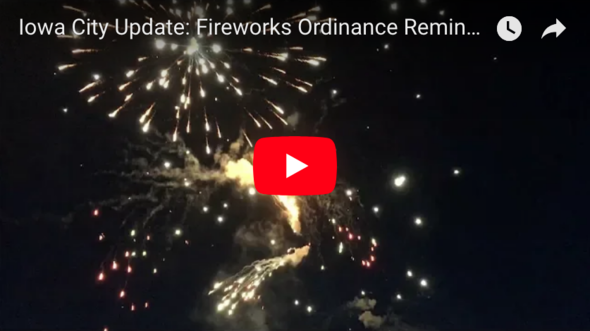 Make sure you are aware of the City’s fireworks ordinance as you celebrate the New Year.

Get details on the curbside collection of holiday trees.

Breakfast on a Budget

Help kick off the City’s annual budget process with over breakfast.

Plan your next visit to the Bookmobile as the Winter/Spring Schedule begins.

MINNEAPOLIS -- The Chicago Bears delivered on their promise to treat Sunday’s regular-season finale against the Minnesota Vikings with a sense of urgency.

The Bears not only vanquished a division rival 24-10 -- and the Vikings have some serious soul-searching to do in the offseason -- but they ensured themselves a full head of steam entering the postseason. The Bears will play host to the Philadelphia Eagles at 4:40 p.m. ET Sunday in the wild-card round.

IOWA CITY, Iowa -- It had been over three decades since Iowa had last finished its non-conference team schedule undefeated.

But the 24th-ranked Hawkeyes will resume Big Ten play next week at 0-2 in the league -- and coming off one of their ugliest wins in years.

We're talking the smokey flavors of hickory, oak and fruit woods.  We're going to see bolder sauces, more varieties of meats, cheeses, buns, toppings like crispy fried onion rings, and of course - more bacon!   Expect to see a lot more brisket in a variety of sandwich offerings in 2019, it's predicted to be THE meat for the year.

Arby's pretty much lead the way in breaking out better sandwiches in 2018 and look for that trend to continue.  They gave us several limited time offerings of what they called "Signature Sandwiches" like their Smokehouse Brisket Sandwich featuring smoked brisket, smoked gouda, crispy onions, mayo and BBQ sauce, served on an artisan-style roll.  Now that's kicking it up a notch!  And have you ever combined Arby's Sauce AND Horsey Sauce on a sandwich?  It's a great combo of the two sauces and offered on their "Arbynator."  Their Beef Short Rib sandwich was mighty tasty too!

Sonic is now offering a Steakhouse Bacon Cheeseburger which I have yet to sample.  It's a quarter pound burger served on a Brioche bun layered with natural cheddar cheese, crispy bacon, grilled onions and topped with a smokey black pepper mayo.  It sounds like a great deal along with medium tots for only $4.99.  I'm looking forward to trying it!

Wendy's hasn't really ventured into the Smokehouse/Steakhouse world yet.  Sure, they've got their Baconator, a mammoth of a sandwich, but it's basically just a standard double cheeseburger with bacon thrown on it.  Regular mayo, American cheese, standard bun....  Don't get me wrong, it's a good burger, but it's NOT really a Smokehouse/Steakhouse level burger.   I don't expect Wendy's to sit on the sideline too long on this, they are no doubt working on something to add to their menu.  Competition demands it.

Burger King has an interesting sandwich with a smokehouse theme but surprisingly, they're not hyping it up much since its unveil clear back in 2017.  The sandwich features to two flame grilled patties, three strips of thick cut bacon, crispy onion rings, bbq sauce, American cheese and mayo on a sesame see bun.   I've become a bit tainted against Burger King though and haven't yet tried this burger.....  Well, if I did and don't remember it, then it's unremarkable.  There's not a well run Burger King restaurant in my neck of the woods and the chain seems to be in some kind of decline funk overall.  Perhaps that's why the marketing of this sandwich, which was introduced ahead of the curve, hasn't taken off.

Hardees has done absolutely nothing to break into the smokehouse cravings of consumers market.  And while their "Thickburgers" are good, they're classic burgers, not smokehouse style.

The new year looks promising for a continued trend of more upscale burgers and sandwiches from fast food.  Hopefully, new offerings won't be limited to what has been so far, mostly burger offerings.  There's also the possibility that one or more of the mainstream fast food joints may offer a smokehouse style veggie sandwich or side.  I'm looking forward to sampling new menu items and finding new favorites!

Have you made your New Year's resolutions?

If improving your health is one of them you will want to be at Coral Ridge Mall January, 19-20 and get information on improving your health. Health screenings will take place between 1-5pm both Saturday and Sunday. Information will be available during the entire show. After you get your health goals on track take some time to relax and shop our local crafters and vendors.

Iowa City Transit has resumed regular operations. Customers should be aware that there may be some residual delays due to the weather-related suspension of service.

Coralville Transit will resume their regular schedule; delays are anticipated as a result of the weather.  For real-time bus arrival information, visit www.bongo.org.

Effective immediately Friday, December 28, 2018, Coralville Transit has suspended service until further notice. Passenger safety is our priority, and road conditions as of Friday afternoon have made travel dangerous. For current updates, call Coralville Transit at 319-248-1790.

Neighbors are invited to attend an upcoming informational meeting about planned improvements to American Legion Road from Scott Boulevard to Taft Avenue.

A public meeting will be held from 4 to 6 p.m. on Thursday, Jan. 10, 2019, in the Media Center at Hoover Elementary School, 1355 Barrington Road. This will be an open house format where people can stop in at their convenience.

The meeting will feature exhibits that illustrate planned improvements, including intersection treatments, and pavement reconstruction, as well as sidewalks, on street bike lanes, and a pedestrian underpass near Hoover Elementary School. The design consultant and City staff will also be available to answer questions about the proposed improvements and anticipated schedule.

For more information visit the project web page, icgov.org/AmericanLegionRoadProject, or contact Scott Sovers at 319-356-5142, or scott-sovers@iowa-city.org.