CEDAR RAPIDS – Effective Monday, December 3, the northbound  lane on 1st Street SW will be closed between Diagonal Drive and 5th Avenue and for utility work. Work is expected to take one (1) day, weather permitting. Traffic should take an alternate route, or expect delays as southbound traffic is diverted to the northbound lane .

Grade: K-6 Deadline: 72 hours prior to each class date… Read on

The Arbynator from Arby's is an excellent sandwich, a repeat buy - Bachelor on the Cheap 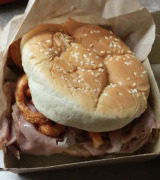 It's the restaurant's Roast Beef n' Cheddar sandwich with a stack of curly fries on top and it's FANTASTIC!

The Arbynator has Roast Beef, Cheese Sauce, Horsey Sauce®, Arby’s Sauce® and Curly Fries, all in the same sandwich. Or in other words, it is the most Arby’s sandwich Arby’s has ever made. Available in Classic, Double and Half Pound sizes.

I went with the classic version in this taste test and the sandwich was a delight with every bite!  The stack of roast beef, the cheddar sauce, complimented by the marriage of Arby's and Horsey sauces, topped with those crunchy on the outside, tender on the inside curly fries and served on that sesame seed bun......  WOW did this sandwich hit the spot!

It's only available for a limited time, so I would suggest you take advantage of it while you can.  Rumor has it Arby's will stop serving it on December 23.

The sandwich ROCKS and I got curly fries in every bite!

I purchased my Arbynator Classic for just $4.50 (that's with tax) and it's a meal all by itself, totally satisfying.

The Arbynator gets five out of five Bachelor on the Cheap stars and is most definitely a repeat buy!

For other food reviews, drink reviews and recipes, go to www.bacheloronthecheap.com

Members of the media are encouraged to visit the Cedar Rapids North Target store at 1:30 p.m. on Wednesday, December 5th to learn more about this community program.

Cedar Rapids police officers will shop with over 100 children that have been selected for the program this year.  Children are referred to the program through local schools and other community resources.  Police officers, often referred to as “Santa Cops” by the children at the event, will help children pick out winter coats, boots, hats, gloves, and a toy for the upcoming holidays.

The Cedar Rapids Police Protective Charity is a collaborative effort of Cedar Rapids police officers, community donors, and local businesses to provide assistance to those in need.  Each year the organization hosts events like Cops and Kids Back to School as well as Santa Cop.  The Charity also partners with the Child Protection Center to provide backpacks of hygiene items for foster care.   The Charity also supports and partners with Special Olympics of Iowa.  For more information, please visit www.crpolicecharity.com.

Get a head start on your holiday to-do list by wrapping presents at the Iowa City Public Library.

The Library will provide all supplies, including wrapping paper, ribbons, scissors and tape. You provide the presents. In order to serve as many people as possible, participants are limited to wrapping five gifts per person.

A simple bourbon cocktail: Hillbilly High - Bachelor on the Cheap 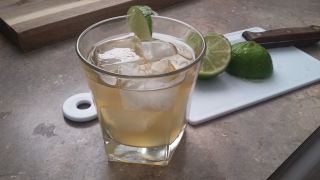 This is a go-to adult beverage for me, of my own invention, I call it, the Hillbilly High.  It ain't purdy, it ain't sweet, it ain't lady-like foo-foo, it don't have an umbrella in it.

It's bourbon dammit, with a caffeine kicker.

Serve on the rocks.

What makes it Hillbilly?  Well, the best American Whiskeys (Bourbon is my preference) come from Kentucky and Tennessee, Hillbilly country.

What makes it "high?"  Mountain Dew, not only was it invented in Hillbilly country (Tennessee), it brings the caffeine kick!

And the recipe is so easy, ask your favorite bartender to whip one up for you.

Iowa Athletic Director Gary Barta is being an asshole on this issue.

That's fucked up, I don't care to be polite about this, that's precisely the phrase to use, Gary Barta's intervention and decision in this matter is just that, fucked up. 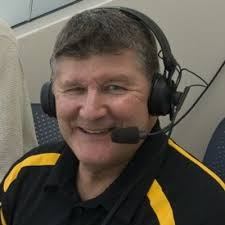 He suspended Dolphin for two games for telling the truth.  Barta's action is complete bullshit.

Make no mistake, the decision to suspend announcer Dolphin for two games comes from Iowa Athletic Director Gary Barta, not Learfield Sports, Dolphin's employer.  If that's not an abuse of power, I don't know what is.

BACKGROUND:  Gary Dolphin is the Voice of the Iowa Hawkeyes, he does the play-by-play for Hawkeye football and basketball games.  He works for Learfield Sports, a private enterprise.  Learfield has exclusive rights to Hawkeye Sports.  Hmmmm.....  So Dolphin made an off-air comment during the Iowa - Pittsburgh basketball game on Tuesday night, 11/27/2018, disparaging Iowa basketball recruiting efforts and to be specific, the efforts of a particular player who dribbles the ball with his head down.  Dolphin thought he was off mic when voicing his observation.  Unfortunately, he was not off mic.  But all Dolphin did was TELL THE TRUTH!  And gee, isn't that what commentators are supposed to do?  What Dolphin did was put into words what most EVERYBODY in the Iowa Hawkeye Nation audience had already seen for themselves and were ALREADY thinking!  He thought the mic was off, it was a commercial break, but the mic remained live during the break and he gets punished for exercising free speech to his on-air partner, Bobby Hansen, who SHARED the same views?   To repeat:  Gary Dolphin was just voicing what everybody in his audience was already thinking!  It's the guy that didn't turn the mic off that should be suspended!

So as a result, Iowa Athletic Director Gary Barta weighs in without really thinking things through.  He works it so that Learfield Sports punishes/suspends Dolphin for two games.  Barta reacts via political correctness pressure....  Think about that and how absurd that really is.

To repeat, if that's not an abuse of power, I don't know what is.  A U of I official, a state employee, punishing a private enterprise on-air personality.

Fuck you Gary Barta, there's just no other way to characterize this.  YOU ARE WRONG!

You are punishing a sports announcer for telling the truth.

With that political correctness in mind, Gary Dolphin apologized for his comments when he came back on air.

And you can appreciate the guy's passion, he WANTS Iowa to perform well:  “Bobby and I were upset when we went into a commercial break,” Dolphin said to reporters after the game. “We were talking about guard play at that point. They (Pitt) certainly had the better of us.

“It’s frustration. I’ve got an Irish temper that gets away from me once in a while. We were in commercial break, and somehow it was live on — I don’t know what app is out there. So, we’ll play it out. We apologized on the air in the postgame show. We all want them to win so bad that sometimes we get frustrated when we’re not playing well in certain stretches. So that’s what happened.

“I’d say it’s a lesson learned, and it is. ... We apologized for it and we’ll move on and deal with it. I don’t know what else to tell you beyond that. We apologized and I understand if Coach (Fran McCaffery) is upset. We’ll smooth it over and move on.”

Punishing Dolphin for telling the truth is messed up.  Period.

And so Barta thinks suspending a guy two games for telling it like it is, is the better move, rather than support the VOICE OF THE HAWKEYES for TELLING THE TRUTH?

Ladies and gentlemen, that's just twisted.  Period.  Barta has it all wrong.

That's what I'd be doing if I were Barta, SUPPORTING free speech, rather than playing a pathetic political correctness game with it.

Why is telling the truth so offensive these days?  A commentator can't even be a commentator now?

IOWA CITY, Iowa -- The first five games were a relative breeze for the 14th-ranked Iowa Hawkeyes, who unexpectedly jumped into the Top 25 after an impressive trip to New York.

Freshman guard Joe Wieskamp had 18 points and 11 rebounds for his first double-double, Nicholas Baer scored 14 of his 16 points in the second half and the Hawkeyes held off Pittsburgh 69-68 on Tuesday night for their third win over a power program this month.