IOWA CITY -- Weather permitting, from 9:00 a.m. until 4:00 p.m. on Wednesday, June 6, 2018 and Thursday June 7, 2018, Market Street will be reduced to one lane of traffic between Governor Street and Johnson Street to accommodate the removal of ash trees along Market Street.

Weather permitting, beginning on Monday, June 4, 2018, lanes of traffic will be shifted on Court Street, between Gilbert Street and Linn Street, to accommodate exterior repair work on a building in the area.  It is anticipated that normal traffic will resume by June 17, 2018.

Weather permitting, on Friday, June 1, 2018, Market Street will be reduced to one lane of traffic between Johnson Street and Gilbert Street, to accommodate work on the Mercy Hospital skywalk across Market Street.  It is anticipated that normal traffic will resume by the end of the day.

Beginning today, Thursday, May 31, 2018, Scott Boulevard has been reduced to one lane of alternating traffic between Freedom Court and Liberty Drive. This lane reduction is necessary to facilitate emergency street pavement repair. It is anticipated that normal traffic will resume by Friday, June 8th.

Motorists are to take note of this construction and allow extra travel time as delays may occur.  As always, caution should be exercised when traveling through all construction areas.

Connect with friends, family and neighbors this summer at Party in the Park. The season begins at 6:30 p.m. on Thursday, June 7, 2018, at Pheasant Hill, located at 2649 Concord Circle. Bring your lawn chairs or blankets and enjoy live music by Bob & Kristie Black, games, arts and crafts, and frozen treats. Additionally, there will be several dates this season that will feature a special performance by the Eulenspiegel Puppet Theatre at 5:30 p.m., before the Party in the Park begins. The Iowa City Public Library Bookmobile will be on hand on Thursdays, as well as representatives from various City departments who will share information about their areas of expertise. Party in the Park is a no-fee event and is open to the public.

Sponsored by the Iowa City Parks and Recreation Department and the Neighborhood Outreach Division, Party in the Park gives residents a chance to enjoy their summer evenings outdoors with friends and family while exploring the City’s many beautiful natural spaces and neighborhoods.

Weather permitting, street pavement repair work will begin next week at various locations in Iowa City.  This work will reduce traffic to one lane of alternating traffic on the following streets:

Motorists are encouraged to allow extra travel time or to seek an alternate route during this time period.  As always, caution should be exercised when driving through all construction areas.

The Public Libraries of Johnson County will work together to help libraries in Puerto Rico affected by hurricanes Irma and Maria.

Beginning June 1, the Public Libraries of Johnson County will have a collection spot for monetary donations. Donations will be accepted through June 30. All funds raised will be used to replace books, videos, and other materials lost or damaged in the 2017 storms.

This effort was initiated by the American Library Association (ALA) and REFORMA, the National Association to Promote Library and Information Services to Latinos and Spanish Speakers. Together, the groups created the Adopt a Library program, which matches damaged or destroyed libraries in Puerto Rico, the U.S. Virgin Islands and other locations in the Caribbean.

The Iowa Library Association (ILA) was matched with the Francisco Oller Library in Puerto Rico.

Francisco Oller Library is an academic library located on the Escuela de Artes y Diseño de Puerto Rico (EAPD) campus in San Juan. It is the only institution in Puerto Rico offering a Bachelor of Fine Arts with majors in Art Education, Digital Art and Design, Fashion Design Industrial Design, Painting, Printmaking and Sculpture. Prior to Hurricane Maria, the campus had 518 students enrolled. That number dropped to 398 during the spring 2018 semester. Campus damages related to the hurricane are an estimated $2 million.

The Francisco Oller Library suffered infrastructure damage, losses in the collection, and was affected by the proliferation of mold due to the lack of electricity and air conditioning. Health concerns had the staff of four offering limited services in a designated area outside the library, including reference services and loans for items checked out before the hurricanes’ arrivals, until it was deemed safe to go back inside.

As of March 2018, the library has reestablished basic services and resumed its customary hours of operation, but Director Estrella Vázquez says there’s a long way to go to reach normal, including fixing the library's infrastructure to avoid future damages to its collections.

“We have a big challenge: attract and impact again the users who stopped visiting us because the library was closed for such a long period,” Vázquez said in a statement to ILA. “We are focusing in trying to finding a solutions to offer them all the resources and services, including stable internet and energy, since we are still facing those problems.”

The ILA hopes to raise $15,000 for the Francisco Oller Library. The Public Libraries of Johnson County are pleased to be part of the association’s efforts and invite all patrons to give what they can throughout the month of June. Donations can be made in cash or by checks made payable to the Iowa Library Association with Francisco Oller Library in the memo line.

I recently assisted one of my sons with a phone upgrade at the local Sprint store, he got a Samsung S-9, nice phone.

While there and a bit of traveling on the agenda, I also picked up a 4.8 amp dual USB car charger, made by iWalk.

First mistake:  Paying too much for the charger at a phone store, higher markup vs. say, Walmart.  Yes, I must admit, convenience got the better of me.  I paid $24.99 for the charger.  Sprint also offers dual port car chargers made by other vendors, but they're more expensive.

Second mistake:  This was an, "Oh yeah, I need one of those," impulse buys.  I didn't do any homework on this product, no asking around or reading any reviews regarding quality or performance. 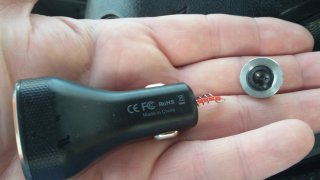 Long story short, I made the purchase and not two hours later decided to give it a try, my phone needed a charge.  Not only did I open the box and see a white charger inside even though the box said and the picture showed I was buying a black one, but guess what, the tip that engages the vehicle power port was not attached to the body of the charger, the insulator inside the cone tip was broken.  What was supposed to be a one piece gadget, was in two pieces, inside guts exposed.  I took the product back immediately and made an exchange, this time checking the product with the sales guy, opening up the box to ensure the charger wasn't broken.  This one was in one piece, not two and by gosh it was black just like the picture on the box!  But it wasn't removed from the packaging for a more detailed review.......  Could'a, Should'a....  Shame on me.

So I start traveling down the road, plug the charger into the port, plugged the phone into the car charger and so far so good.  My phone was at 23% and had charged up to 47% when I arrived at my destination.  I unplug my phone, pull the charger out of the port and guess what?  The tip remained in the port, same issue, broken insulator, rendering the charger useless.  Time for a refund. 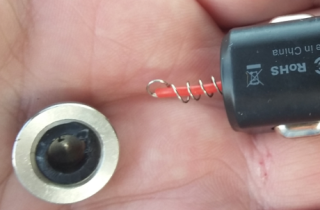 I'll be going for a different tip design with my next charger and it won't be anything made by iWalk.

The 4.8 amp dual USB car charger, made by iWalk gets zero out of five stars.  Even if this was a shipping issue, not the fault of iWalk, it begs the question, "They make it so fragile that a dropped box renders the chargers packed in the box useless?"

I obtained two chargers and they both had the very same issue.  Chargers made by iWalk are NOT Bachelor on the Cheap friendly.  They suck, they're fragile, they're over-priced.

New wheeled recycling bins will be delivered to North Liberty homes starting on May 30, 2018, by Johnson County Refuse. Customers can, but aren’t required to, begin using these recycling carts immediately (new trash bins cannot be used until July). Old, unwanted bins will be collected for recycling in July at no charge.

Old bins will be collected based on your address:

Containers should be empty and at the curb by 6 a.m. for collection.

All recycling should be place inside the bin, with the lid closed and its opening facing the street by 7 a.m. on collection day. The items collected, including paper, plastics, glass and cans, remain the same. Recycling should be clean. Hazardous materials, chemicals, diapers, plastic bags, clothing, wood and other non-recyclable should not be placed in the bin.