Time for a guilt free night off for parents of preschoolers!… Read on

Whether your wee one isn't walking yet or you have a speedy toddler, we hope to help you make the connection with trails in the area and with others who like...… Read on

Nature play offers a place where children can find peace and wonder. It is not bound by time or confined by walls. It is the best playground of all filled with a...… Read on

Nature play offers a place where children can find peace and wonder. It is not bound by time or confined by walls. It is the best playground of all filled with a...… Read on

On March 21, at 1137 AM the Iowa City Police Department (ICPD) was dispatched to 955 Mormon Trek Boulevard to a report of a robbery.  According to the victim, a male suspect displayed a knife, demanded cash, and then fled the area in an unknown direction of travel.  Multiple officers responded to the area whereupon a suspect was located that matched the description provided by the victim.  After a brief foot pursuit, the suspect was taken into custody.  There were no injuries reported during this incident.

Over the course of subsequent investigation, a seventeen-year-old male was charged with Robbery in the First Degree.  The suspect was then transported to the Linn County Juvenile Detention center without incident.

The ICPD was assisted in this investigation by the University Heights Police Department.

As with any criminal case, a charge is merely an accusation and the defendant is presumed innocent until and unless proven guilty.

Who has the best fast food fish sandwich? They are listed here from worst to first - Bachelor on the Cheap 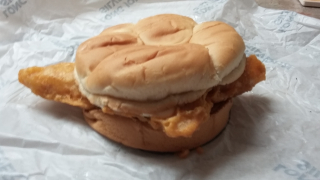 What are you supposed to eat when none of the above sounds good?

A crispy fish sandwich of course!

But which fast food joint makes the best fish sandwich?

In the name of 'food science' (a'hem, cough), I have sampled fish sandwiches from all the national fast food chains I have access to in my neck of the woods that have a fish sandwich on their menu.  Which restaurant and their version of a crispy fish sandwich will get top honors?

I went through the restaurant list, one meal at a time.....  What?  I ate nothing but fish sandwiches for lunch AND dinner, a total of 9 meals?

Here is "The List" of fast food joints offering fish sandwiches, from worst to first:

Thank goodness it's Friday Night Lights! Get ready to sweat it out in the gym and express your creativity with art, the building corner, and our special events...… Read on

Grade: K-6 Deadline: 48 hours prior to each class date… Read on

IOWA CITY -- Weather permitting, beginning on Monday, April 2, 2018, N Governor Street will be reduced to one lane of traffic between Brown Street and Dodge Street.  This lane reduction will facilitate the installation of water and sanitary sewer service lines in the area.  It is anticipated that normal traffic will resume by the end of the day on Friday, April 6th.

Motorists are to allow extra travel time when traveling through the area as delays may be possible.  As always, caution should be exercised when driving through all construction areas.

Drivers should take note of this closure and use another route. As always, be cautious when traveling in construction areas.