Is your drain fully clogged or draining really slow? Take advantage of our auguring, snaking, and water jetting services to take care of your problem.

We offer residential and commercial clients septic pumping, flushing, TV inspection, and more! You can count on us for all of your septic needs.

If you are experiencing septic or drain problems, give us a call for your FREE estimate. For your protection, all of our professionals are fully insured.

Richard and his son, Roger Croell, built Croell from the ground up, using concrete of course. They constructed the first plant in their hometown of Lawler, Iowa during the spring of 1968. Croell soon expanded into three locations, adding plants in Prairie du Chien and Sumner in the early 70’s. It was during this time that we made Croell a leader; focusing on the excellence of our concrete and our customer service.

Today our company is in six different states with more than 80 locations. The expertise that was acquired in the beginning stages of Croell has never been forgotten. Even though our company has expanded into several other companies to suit our various customers’ needs, our commitment to serving our customers is still our highest priority.

Lynch's Excavating was established in 1977 by Dale Lynch, while Dale was working as a full time Firefighter for the Iowa City Fire Department. Dale started out with just a trencher doing water lines, as business started to pick up he kept adding equipment along the way. While Larry was in high school he worked for Dale helping the business grow. In 1984 after his brother Larry graduated from High School Dale decided to quit his work as a full time Firefighter. Dale then went full time into the excavating business with his brother Larry. Larry purchased Lynch's Excavating from his brother Dale in 1999 and is still providing quality service to our customers. 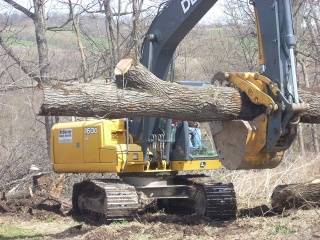 We look forward to helping you with your Septic and Excavation project!  Our experience insures your project is completed professionally and on budget.  For Quality work and a Fair Estimate, you can count on McBurney Septic. We help you work through all the uncertainties of building site excavation so that you get the best possible result. A successful building project depends on an excellent foundation.  Put our experience to work for you!

Join us as we tour new and exciting restaurants in Eastern Iowa. Recreation staff will facilitate the tours. Transportation is available, but seating is limited....… Read on

Cedar Rapids, IA – Cedar Rapids was chosen as a finalist for Iowa’s Healthiest State Initiative (HSI) award in the community category. The city was identified for advancing efforts to improve the physical, social and emotional well-being of Iowans. Last week, Cedar Rapids was also identified as home to some of the most active residents in the country, according to Fitbit’s year in review report. Using data collected from the more than 3.5 million active users, Cedar Rapids, Dubuque, Iowa City and Waterloo all ranked seventh on the top-10 list for most active cities.

“For the past five years we have actively worked on well-being initiatives in Cedar Rapids. While the Blue Zones certification period will end this year, the recognition we are receiving demonstrates that the work we have done has paid off. We plan to build on the success of our past efforts and transition to the Healthiest State Initiative’s Healthy Hometown program where we can continue to work to support well-being initiatives for a healthier, more active Cedar Rapids,” said Sandi Fowler, Assistant City Manager.

Other finalists in the community category for the Iowa’s Healthiest State Initiative award are Ames, Clive, Harlan, Mason City and Sioux City. Pierce Elementary School, in Cedar Rapids, was named a finalist in the school category, and Matthew 25, was selected as a finalist in the small workplace category.

Winners will be announced at HSI’s inaugural award event on February 15, from 5:00 to 7:00 p.m., at the Ron Pearson Center in West Des Moines. Each winner will be granted a monetary gift to continue their work focused on improving the health and well-being of their employees, students or citizens.

“The Healthiest State Initiative is proud to recognize the work these finalists have been doing to improve the overall health and well-being of Iowans,” said Jami Haberl, Healthiest State Initiative executive director. “They have set a great example for other individuals, communities, schools and workplaces to emulate. We look forward to sharing their stories at the awards event.”

The Healthiest State Initiative is a nonpartisan, nonprofit organization that strives to make Iowa the healthiest state in the nation. Tickets to the award ceremony can be purchased at www.IowaHealthiestState.com.

Wonder Wednesdays, an after school STEAM-based program for students in kindergarten through second grade, begins Wednesday, February 7, at the Iowa City Public Library.

Join us from 4 to 5 p.m. every Wednesday in February as we explore Science, Technology, Engineering, Art, and Math in fun and creative ways.

February 7: S is for Science

This week we will be conducting science experiments and explore sensory activities related to winter weather!

February 14: T and E are for Technology and Engineering

Play and build with our Library robots, Dot & Dash, and LEGOs.

Join us for string art activities.

This week we will be starting our Crazy 8's Math Club and joining the Toilet Paper Olympics. Get on a roll with your Olympian skills in the shot put, the long jump, and the relay race.

Our concrete products, septic tanks and other items are extremely durable. Our experienced staff uses the latest technologies from top manufacturers for your residential and commercial needs.

Fairfield Precast Concrete was one of the first companies in Iowa to build tanks for Eco-Pure Peat Biofilter systems.

Wilkinson Precast Inc. is a family owned business that has been manufacturing quality precast concrete products since 1953. Many of our original structures are still in service. Our Riverside, Iowa plant serves Iowa and the surrounding states. We specialize in quality solutions with concrete products that help the environment. Years of experience in large water, waste and utility structures mean that Wilkinson has built a repertoire of unique solutions to many problems of design. We know and appreciate that our customers depend on our quality service and understanding of their requirements. We are proud to share this knowledge and serve you, our customers, in the best way we can.