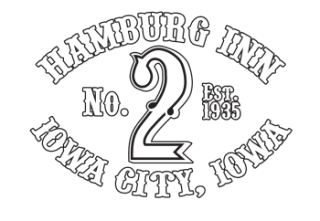 The Hamburg Inn began in the mid 1930's when Joe Panther started Hamburg Inn on Iowa Avenue. Nicknamed “grease spots,” burgers sold for a nickel and there were 10 to a pound. Adrian Panther, Joe's brother, joined in the business and eventually bought the restaurant.

In 1948, Mrs. Van's Restaurant on N. Linn Street was bought by another brother, Fritz Panther and his wife, Fran. Adrian and Fritz formed a partnership with Hamburg Inn No. 1 and No. 2, over the years opening Big Ten Inn on Riverside Drive and the Airport Inn. Hamburg Inn No. 3 was located in Cedar Rapids on Center Point Road. Hamburg Inn No. 2 is the only remaining location. Dave Panther, Fritz and Fran's son, bought the restaurant from his parents in 1979, continuing the tradition of “Comfort Food in a Fifties Time Capsule.” Dave has also been a professional clown and storyteller for over 15 years.

Hamburg Inn No. 2, one of Iowa's most famous restaurants, was featured in the Washington Post's “Great American Hamburger Debate,” National Public Radio's "All Things Considered" and Susan Stramburg's “Every Night at Five.” The Quad City Times called us “[...] a piece of Americana.” It was a film location for the movie “Zadar, Cow from Hell.”