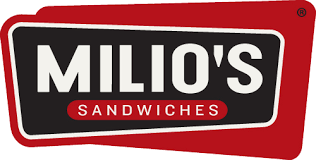 From waiting tables as a teen to owning Hot Dog stands in Chicago . . . Milio's founder "Big Mike" Liautaud, has been in the restaurant business his whole life. The story of Milio's dates back to the late 1980's, when Mike sold his Hot Dog stands, packed up his family and moved to Wisconsin.

In March of 1989, Mike opened one simple sandwich shop in the college town of Madison, Wisconsin in the heart of the UW campus and cleverly named it "Big Mike's Super Subs" and served the best darn sandwiches in town.

Big Mike had big dreams, and that one simple sandwich shop turned into a successful sandwich shop chain with over 40 locations throughout the Midwest. Somewhere along the way, he had the big idea to rename Big Mike's Super Subs to Milio's . . . a bit of a combination of Mike + Liautaud.

Who knew trading in hot dogs for cold cuts in one small sandwich shop, would one day become what is now known as Milio's Sandwiches? Mike did . . . well maybe a hunch.