One of the best compliments to any meat/fish dish is a great pan sauce.  Sauces add another texture and some moisture to your dish (and just in case you overcooked that pork chop or chicken breast, you'll need that sauce!), more importantly, it's another layer of FLAVOR!

Knowing how to make a quick pan sauce can turn that plain pork chop into a mouth-watering entree or a boring chicken breast into a, "DAMN this is good!"

One of my go-to preparations when I pan fry a meat or fish is rubbing that protein down with equal parts Parmesan cheese, garlic powder and seasoned salt.  I use that as a substitute for breading.  After you've cooked that Parmesan/garlic powder/seasoned salt rubbed protein in some olive oil to perfection, remove from the pan, but don't turn off the heat.

It's time to make a sauce.  You'll probably notice a bunch of "brown bits" in that pan.....  That's FLAVOR!  It's all that seasoning rub and olive oil goodness that didn't stick to the chop, chicken, steak or piece of fish.  In culinary terms those brown bits are called 'Fond' and that fond is the base for a great sauce.

All you need to do after you remove the protein from the pan is add liquid.  Just about anything will do, chicken stock, beef stock (I like to use low sodium varieties, because you've already added salt to the rub and you don't want to over-salt), wine (take the pan off the heat before adding any kind of alcohol), cream, heck even water will do the trick, about a 1/2 cup will do.  After adding that liquid, stir things up with a wooden spoon or a whisk to break up the fond and incorporate it into the liquid, creating the sauce.  This is a loose sauce, not a gravy, cook to desired thickness and pour over the meat.  Parmesan, seasoned salt, garlic and yes, even when combined with plain ol' water, is DELICIOUS!  It's another does of YUM!

Bonus, cleaning the pan just got a lot easier!

If you've never had lamb before, it's a MUST try!  Lamb is the go-to meat in much of the Mediterranean. It's used there like beef is here in the states to make sandwiches, casseroles, entrees and sides.  It's enjoyed as roasts, chops and you've probably heard of a 'Rack of Lamb' which is delicious!    The meat presents a whole different flavor profile and it's outstanding!  So if you're looking for something a little different to try, lamb is the ticket, no mint jelly required!

Meat Temp for Lamb:  To get a medium rare, grill lamb until the meat thermometer hits the 135 degree mark.   Remember to let the meat rest after pulling it from the grill!

A lamb chop from the grill is OH SO TASTY!  If you've never grilled lamb before this is the cut to grill that first time.  They are easy to do and do well and by serving lamb to dinner guests you'll look like a real grill pro.

Directions
Whisk together the wine, olive oil, rub, garlic powder, minced onion and Rosemary. After placing the chops in a ziplock bag, pour the wine mixture over the chops and let those flavors marry, refrigerating for at least four hours. Grill over direct heat, lid off, to get that good sear and great looking grill marks, 3-5 minutes depending on the thickness of the chops. After you’ve got that great presentation side look, flip the chops over to the low heat side of the grill and cover. Grill for about another 15 minutes or until the meat thermometer hit’s the 135 degree mark (medium rare). In the grill set-up, cherry wood pellets add another layer of flavor. TIP: Trim some of the fat off the chops before marinating or rubbing and save it to create pan drippings. When you’re grilling, put those fat trimmings in a cast iron skillet over low heat and let them render to create the base for a sauce or gravy.

A quick pan sauce for chops…. Combine lamb fat drippings with a little flour, some black berries or blueberries - whatever kind of berry you might have on hand for that matter - and some balsamic vinegar. Salt and pepper to taste and you’ve made an excellent compliment to the chops!

The Iowa Utilities Board on Monday granted Iowa American Water the authority to implement a 10.37 percent rate increase that will boost annual revenue by $3.9 million.

The decision comes almost 10 months after the company applied for a 13.7 percent rate increase that would have grown annual revenue by $5.15 million.

However, customer rates will not be set until Iowa American develops and files a new rate design, which the state board must review and approve.

The final order amount includes the utility's previous temporary rate increase on May 9, 2016, that added $2.33 to the average monthly bill and expands its annual revenue by about $2.1 million.

LINCOLN — Nebraska and Iowa rank high among states — but not at the top — for the job they do serving their residents.

At least, that’s according to a new U.S. News & World Report ranking of the 50 states to be released today.

U.S. News, which has a long history of ranking colleges and hospitals, developed the new Best States ranking based on what residents value most in their states.

Global oil prices dipped on Tuesday but continued to trade in a tight range with the OPEC-led output cuts offset by increasing crude production from the United States.

The Organization of the Petroleum Exporting Countries has so far surprised the market by showing record compliance with oil-output curbs, and could improve in coming months as the biggest laggards - the United Arab Emirates and Iraq - pledge to catch up quickly with their targets.

But while the Nov. 30 agreement to reduce production prompted oil prices to rise $10 a barrel, they have been trading in a narrow $3 range in recent weeks.

Washington (CNN) President Donald Trump will sign Tuesday an executive order requiring the Environmental Protection Agency to review Obama-era water regulations to make sure they are not harming the economy, according to an internal EPA email obtained by CNN.

The order -- which is currently in draft form and subject to change before Tuesday afternoon, when Trump is expected to sign it -- addresses the "Waters of the United States" rule, which applies to 60% of the bodies of water in the US.

President Trump on Tuesday morning said his joint address to Congress this evening would focus on the central planks of his campaign – the military, the border, jobs and health care – and he took responsibility for any communications miscues that have blunted the effectiveness of his message in the early days of the administration.

Trump, in an exclusive interview with “Fox & Friends,” specifically cited his immigration policy, and said that perhaps the rollout of his plan to keep out and remove criminal illegals hadn’t been “communicated effectively.”

He later awarded himself a grade of a “C” or “C-plus” on communicating, straightforwardly saying, “My messaging isn’t good.”

Cook beginning to figure things out for Hawkeyes

He scored 14 points in a victory over Indiana and added a Big Ten career-high 21 in a Saturday night upset of Maryland.

That’s nothing new. The 6-foot-9 freshman has been the team’s second-leading scorer most of the season. What has been different for the past few weeks is that Cook is beginning to do many of the less noticeable things that Iowa coach Fran McCaffery hoped he could give the Hawkeyes.

According to our "Oh-so-wise" government, in order to maintain a healthy weight, the U.S. daily recommendation is to consume 225 - 325 grams of carbohydrates per day based on a 2,000 calorie diet.

The typical American these days wakes up, gets ready for work, travels to work be it by car or mass transit.  Sitting at a desk makes up much of the day for many.  Standing on your feet performing light physical duties is what takes place for many others.  For most folks, regular exercise is not part of the routine, which is wake up, work, do something not really physically demanding after work, get some sleep, repeat.

That typical way of life does NOT require 225 to 325 grams of carbohydrates a day to function.

A sedentary lifestyle - desk jockey, no work out - your body only needs about 135 grams in carbs to maintain body weight....  Note I said 'maintain', not lose weight.   If you want to lose weight, that carb gram intake needs to be under 60 a day.

A moderate lifestyle - standing on the job, light physical activity - your body only needs about 180 grams in carbs to maintain weight.

So what does that mean in terms of food?  Cut back on the potatoes, rice, pasta and bread.  And it's not that hard.

A typical slice of bread/toast has 13 grams in carbs.  It takes two slices of bread to make a sandwich and most folks eat two pieces of toast with breakfast.  That's 26 carbs total.

A medium potato has 38 carbs.

Those are all typical serving sizes.  So follow me on this.....  You have two slices of toast/biscuit, croissant/bagle with breakfast, around 26 carbs.... Having a side of hash browns with that?  Add another 19 carbs.  Chinese stir fry and rice for lunch, 23 carbs and that doesn't count the carbs in the veggies that are part of the stir fry....  Some potato chips for an afternoon snack, let's say another 19 carbs.....  Spaghetti and meatballs for dinner, and you had two helpings along with some garlic bread....  Add another 96 carbs....    Total carb intake for the day?  A whopping 183 grams in carbs!

For that sedentary lifestyle, you've gone over what your body ACTUALLY needs by about 50 carb grams.  Do that everyday and yes, you'll gain weight.

"But Mike," you say, "that 183 grams in carbs you laid out in a typical day is perfect for somebody with a moderate lifestyle right?"

The Juicy Lucy
This burger was made famous in Minnesota, instead of a burger with a slice of cheese on top, it's a burger with ooey-gooey cheese melted in the middle core of the burger. 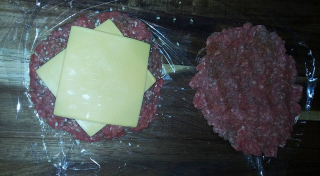 In a large bowl, season the ground beef with the Cookies Flavor Enhancer or the salt & pepper and hand mix until the seasoning is incorporated. Add the pork sausage, hand mix again until incorporated into the beef. Form into thin patties, larger than the cheese slices.  Lay a formed patty on some plastic wrap, top with two slices of cheese, then top with another patty and pinch the sides to seal.  When your grill is ready to receive, place the patties over the hot spot to get those great grill marks and a good sear. Keep the lid off and watch for any flare ups.  Because that cheese is in the core of the burger, it's going to be tougher to know when to flip the burger.  Carefully check the underside of a burger and if you've got some great grill marks, go ahead and flip the burgers over to the lower heat side of the grill and get ready to put the lid on.  These burgers take a longer period of indirect cooking time to ensure they are done on the inside.  Before ‘lidding‘, place the butter and garlic in a grill safe dish to melt down on the low heat side of the grill next to those great smelling burgers. Check after about ten minutes. Pull the burgers and let them rest. Apply the melted garlic butter to the hamburger buns and toast. Serve with your favorite burger toppings.  The great thing about these burgers is playing with a variety of cheeses.  Melted cheddar, swiss and or provolone are great too!  Do combinations or specialty cheeses like pepperjack.  Your choices are almost unlimited!