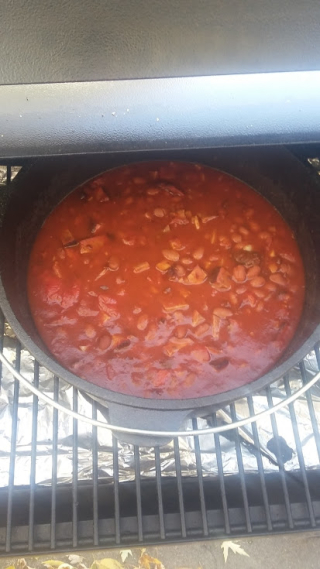 This is pretty much the same as my standard chili recipe, but using leftover brisket instead of the ground beef and chipotle peppers in adobo sauce instead of the tomato paste.  Burnt ends are GREAT for this!  Brisket brings a whole different flavor to a chili.   It's another dose of YUM!

In a cast iron Dutch Oven, heat up the olive oil and saute the onion, celery and chili powder until the onion starts to appear translucent.  Add the cubed brisket, garlic, cumin, green chilies, beef stock and chipotle peppers in adobo sauce and let that mixture simmer  for about 10 minutes, keep an eye on the pot, you may need to slide it a bit more towards the indirect heat side of the grill.  This is going to give you a nice, deep smoky flavor with that adobo sauce and rub from the brisket getting all married in the pot.  Add in the remaining ingredients, stir to incorporate and let that come up to a slow rolling boil, then if you haven't moved the pot over to the indirect heat side of the grill already, do so now.  Keep the lid off to tease people in the neighborhood with that great aroma for about 20 minutes, or until you reach desired thickness.  Option:  Serve the chili with another squeeze of lime from the remaining half.