#1 Cab, L.L.C. is a cab you can count on 24 hours, 7 days a week, 365 days a year.(Rain, snow or ice won't stop us). There's a reason we're called #1 Cab, our commited goal is always customer satisfaction, quick, convenient, clean, reputable and more important trustworthy cab services. We not only service Iowa City, Coralville, IA but the surrounding areas. Our cab will go anywhere you need to go. Moline airport, Cedar Rapids airport, Chicago O'Hare, doesn't matter we'll get you there with special rates. So call to make your reservations today.You'll be glad you called our cab company.  We provide airport transportation and are now offering a discounted flat rate fare to or from Cedar Rapids airport for $30.00.

CORALVILLE, IA. -- Brothers Daniel and Drew Thayer were promoted in Taekwondo Saturday after meeting all requirements as judged by the Masters of Kang's Martial Arts Academy. 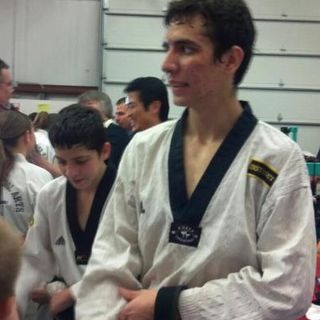 In a blackbelt promotion testing, students are evaluated on a variety of board breaks, endurance, forms, general knowledge of Taekwondo, as well as a full contact sparring match against 3-4 other students simulating a gang-style attack.

Specializing in Taekwondo and Kum Do Martial arts training, Kang’s Academy is located at 2421 James St. in Coralville.  Situated across from the Coral Ridge Mall and close to IHop, Kang’s is open from 4:45pm into the evening hours Monday through Thursday.  A second school is located in Marion.  For more information check out the Kang’s Martial Arts website at http://www.uskmaa.com or call 319-338-2264.

The Coralville Courier welcomes donations from our readers.  Your contribution helps us keep this directory up-to-date and providing you with quality information.  We do not qualify for tax exempt nonprofit organization status. We made the decision early on that conveying information is much more important than any tax benefit might seem to be.  Regrettably, your donation to the Coralville Courier will not be tax deductible.

Donations by cash or check can be sent to:

For those who wish to use a credit card, please follow this link to PayPal.