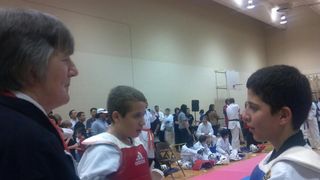 Drew, age 12, won the gold in sparring.  The twins faced off against each other in the championship match for their division.  Drew bested his brother by a score of 7-4.

The brother-against-brother match was a first for the twins in a tournament setting.

The boys' father, Mike Thayer, couldn't hold back his excitement during the match, shouting for both boys to mix it up, get in more kicks and punches.   "It's kind of weird hearing yourself shout for your own sons to beat each other up, you're kind of like, I can't believe I just said that..."

Kang's Martial Arts Academy, where the Thayer boys train, did well at the tournament taking second place in overall points and 2nd place in medals won.  There were approximately 250 competitors at the event.

Specializing in Taekwondo and Kum Do Martial arts training, Kang’s Academy is located at 2421 James St. in Coralville.  Located directly across from the Coral Ridge Mall and close to IHop, Kang’s is open from 4:45pm into the evening hours Monday through Thursday.  A second school is located in Marion, Iowa.  For more information check out the Kang’s Martial Arts website at http://www.uskmaa.com or call 319-338-2264.