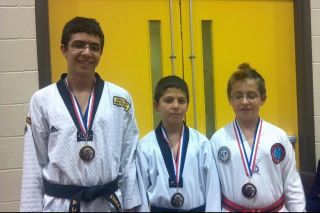 Partipating in the 32nd Annual Iowa State University Taekwondo Championships in Ames, Iowa on Saturday, Daniel Thayer, John Thayer and Drew Thayer all scored medals in a tournament attended by several academies from across the midwest.

Coralville based Kang's Martial Arts Academy specializes in Taekwondo and Kum Do martial arts training.  Kang’s Academy is located at 2421 James St. in Coralville, directly across from the Coral Ridge Mall and close to IHop.  The Academy is open from 4:45 p.m. into the evening hours Monday through Thursday.  A second school is located in Marion.  For more information check out the Kang’s Martial Arts website at http://www.uskmaa.com or call 319-338-2264.